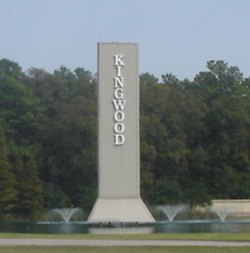 Kingwood is a 14,000 acre (57 km²) master-planned community located in northeast Houston, Texas, United States.[3] The majority of the community is located in Harris County with a small portion in Montgomery County. Known as the “Livable Forest,” it is the largest master-planned community in Harris County and second-largest within the 10-county Houston-The Woodlands-Sugar Land metropolitan area. It was classified as a “census-designated place” during the 1990 census, when the population recorded was 37,397.[4]

Kingwood was created in 1971 as a joint venture between the Friendswood Development Company and King Ranch.[5] Its name was derived as part of that partnership.[6] 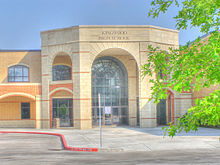 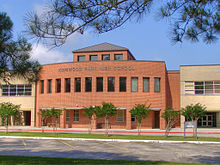 Kingwood is thirty miles northeast of Downtown Houston in the piney woods of southeastern Texas. It is divided into 25 neighborhoods, called “villages”. Most villages have a neighborhood pool providing free access for village residents, and most provide their own set of village-specific services. During the summer, many of the villages organize youth swimming teams affiliated with the Northwest Aquatic League (NWAL).Kingwood has over 15,000 acres (6,100 ha) of space. The community, newly suburban and heavily forested, includes over 15,000 acres (6,100 ha) in nature preserves and parks. Renée C. Lee of the Houston Chronicle compared the presence of forests, parks, and trails in Kingwood to the presence of those features in The Woodlands.[10]

Trailwood is Kingwood’s oldest subdivision, with its first homes being completed in 1971: while new homes are still being built in Barrington, Kingwood Greens, Kings River, Kings Point, and Royal Shores.

The human resources company Insperity (formerly Administaff) has its headquarters in Kingwood.[25]

As of 1999, about 90% of children raised in Kingwood attended colleges and universities.[26]

© 2019 Life Changers, Inc. All rights reserved. CENTURY 21® and the CENTURY 21 Logo are registered service marks owned by Century 21 Real Estate LLC. Life Changers, Inc. fully supports the principles of the Fair Housing Act and the Equal Opportunity Act. Each franchise is independently owned and operated. Any services or products provided by independently owned and operated franchisees are not provided by, affiliated with or related to Century 21 Real Estate LLC nor any of its affiliated companies.